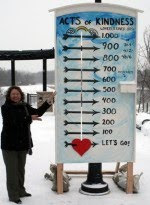 Saw this on Neatorama.

The mayor of Elk River, Minnesota, challenged its residents to perform 1,000 acts of kindness. They responded.

At Christmas time, Klinzing saw a YouTube video about a restaurant in Philadelphia where people kept paying for other diners’ meals. “I got the sense that if we did a similar thing through the entire city, something would change. It would be kind of a climate change. That basically is what happened.”

… even doing little things, like putting a nice note on a student’s locker, can have an effect. “People pay it forward. It makes your day and you are happy because you have such a positive effect on someone. And once you’ve done that, you want to do it more.”

The acts of kindness are posted online. The mayor has challenged other cities to match this accomplishment.