Here's the toon and below is the letter to the editor that ran about it. 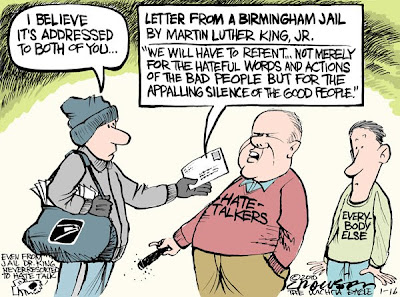 Richard Crowson's editorial cartoon on Jan. 16 was another despicable hit-and-run from the left.

Did he tell us what words were said that were hateful? No. Did he name who said hateful words? No, but we have a pretty good idea. Did his cartoon include the man who actually pulled the trigger? No, apparently Crowson hates talkers more than an actual killer.

Do his hate-talkers include Alec Baldwin, who when appearing on "Late Night With Conan O'Brien" in 1998 screamed that we should stone former Illinois Rep. Henry Hyde to death and go to the homes of House Republicans and kill their wives and children? It doesn't appear so.

Apparently Crowson wants us to imagine that everyone is guilty of either hate speech or is too cowardly to stop it. By the way — didn't this cartoon make Crowson guilty of hate speech?

Does this make me a friend of a hater?

Looks like you touched a sore point. I can't see where you did anything but point out that there are consequences for what we do, say or fail to do or say. Keep up the good work.

Yes, Woody...amongst the commies, leftists, socialists and pinkos, you now can count among your friends, the hateful! You will soon be called to testify to the House Committe on Anti-Limbaugh Activity. If I were you I'd take the 5th...

Welcome back, Bluebird! We are apparently birds of a feather. Thanks for your comments here. I always look forward to them!