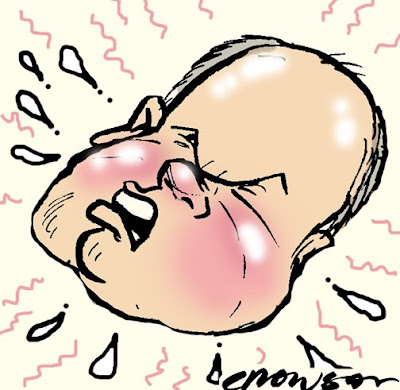 Fears of a Clown
Once upon a time, you could drive to the most remote reaches of the United States and escape Rush Limbaugh. But from the Mogollon Mountains of New Mexico to the Badlands of South Dakota, where only the delicious twang of a country tune or the high-pitched pleadings of a lone lunatic came over the AM dial, there is now the Mighty El Rushbo.

As someone who spends a lot of time on the road, I used to find Limbaugh to be an obnoxious but entertaining companion, his eruptions more reliable than Old Faithful. But now that Limbaugh has become something else — the face of the Republican Party, by a White House that has played him brilliantly — he has been transformed into car-wreck-quality spectacle, at once scary and sad.

The sweaty, swollen man in the black, half-buttoned shirt who ranted for nearly 90 minutes Saturday at the Conservative Political Action Conference. He reiterated his desire to see the president of his country fail. He misstated the Constitution’s intent while accusing President Obama of “bastardizing” the document. He made fun of one man’s service in Vietnam, to laughter.

David Letterman compared him to an Eastern European gangster. But he looked more like a bouncer at a strip club who spent all his tips on one bad outfit. And for the Republican Party, Limbaugh has become very much a vice.

Smarter Republicans know he is not good for them. As the conservative writer David Frum said recently, “If you’re a talk radio host and you have five million who listen and there are 50 million who hate you, you make a nice living. If you’re a Republican party, you’re marginalized.”

Polling has found Limbaugh, a self-described prescription-drug addict who sees America from a private jet, to be nearly as unpopular as Rev. Jeremiah Wright, who damned America in the way that Limbaugh has now damned the nation’s newly elected leader. But Republicans just can’t quit him. So even poor Michael Steele, the nominal head of the Republican Party who dared to criticize him, had to grovel and crawl back to the feet of Limbaugh.

Some expected more mettle from Steele. After all, this rare African-American Republican won his post after defeating a candidate who submitted the parody song from Limbaugh’s show: “Barack the Magic Negro.”

Race is an obsession with Limbaugh, one of the threads I noticed on those long drives on country roads.

When Colin Powell endorsed Obama during the campaign, Limbaugh said it was entirely because of race. After the election, Powell said the way for the party, which has been his home, to regain its footing was to say the Republican Party must stop “shouting at the world.”

In 2003, Limbaugh said quarterback Donovan McNabb was overrated because the media wanted a black to succeed. Over the next six years, McNabb threw for nearly 150 touchdowns and went to a Super Bowl.

And Limbaugh launched the current battle when he said of Obama: “We are being told that … we have to bend over, grab the ankles, bend over forward, backward, whichever, because his father was black, because this is the first black president.”

Translation: submit sexually to a black man because “someone” is telling us all to. Who? Which leaders of the Democratic Party have made such a claim? Which opinion-makers? But therein lies the main tactic of Limbaugh, an old demagogue technique: create a straw man, then tear it down. The latest example was Saturday, when Limbaugh presented himself as the defender of capitalism, liberty and unfettered free markets. Obama, he has said since, is waging a “war on capitalism.”

There is a war, all right. We are witnessing the worst debacle of unfettered capitalism in our lifetime brought on by — you got it, capitalism at its worst. It cannibalized itself. Government, sad to say, had nothing to do with it — except for criminal neglect of oversight.

Now that government has been forced to the rescue, just who is insisting on taxpayer bailouts? Who is in line for handouts? Who is saying that only government can save capitalism? The very leaders of unregulated markets who injected this poison into the economy, the very plutocrats that Limbaugh celebrates.

And, of course, let us never forget that the bailouts of banks and insurance companies were initiated by the Republican president Limbaugh defended for eight years.

Of late, Limbaugh has wondered why he has trouble with women. His base is white, male, Republican — people the party has to stop pandering to if it hopes to govern soon.

It’s little wonder that the thrice-married Limbaugh, who uses “femi-Nazi,” “info-babe” and “PMSNBC” (Get it? The network is full of women suffering pre-menstrual cramps, ha-ha), among his monikers for women, can’t get a date with that demographic.

For Democrats, this is all going to plan. It was James Carville and associates who first cooked up associating Limbaugh with the opposition, as Politico reported. Then on Sunday, White House Chief of Staff Rahm Emanuel said Limbaugh was the “voice and the intellectual force and energy behind the Republican Party.”

Limbaugh played his role, ever the fool. A brave Republican could have challenged him, could have had a “have you no shame” moment with him, giving the party some other identity, some spine. Instead, they caved — from Steele, to the leaders in the House, Eric Cantor and Mike Pence, to Gov. Bobby Jindal, who would be ridiculed by Limbaugh for his real first name, Piyush, were he a Democrat.

You could almost hear their teeth clattering in fear of the all-powerful talk radio wacko, the denier of global warming, the man who said Bill Clinton’s economic policies would fail just before an unprecedented run of prosperity.

But Limbaugh has a fear of his own. If people see him purely as an “entertainer,” as Steele suggested, he will be exposed for what he is: a clown with a very large audience.
Posted by Richard at 6:32 PM 2 comments:

Didja ever think of that? Hmmm? Well, DIDJA???

From the amazing Richard Thompson, drawer of Richard's Poor Almanac in The Washington Post, and of the very delightful Cul De Sac comic strip, come these thought provoking insights about an industry near and dear to your heart and mine. 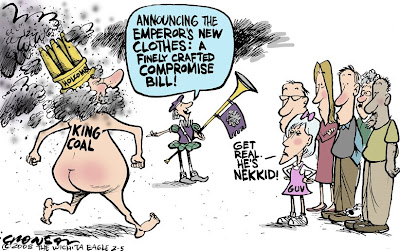